About ten years ago on a family camping trip, I was squatting whilst washing dishes.  I was in that position for a awhile.  Suddenly, I felt a painful "pop" in my lower back.  After that episode, if I lay in bed too long or sleep on the wrong mattress, I have lower back pain that will go away by walking around or sitting upright.

The reason I bring that up is that we had to go out of town last weekend.  My best friend from high school was retiring, I had not seen him in years, and I wanted to go.  Sybil, graciously, helped with arrangements.  One of which was a two night stay in an overpriced hotel in Nashville.  The beds were terrible.  The first night I got my back spasm and had to get up pretty early to get the kink to relax.  Since Sybil, Daughter, Son #3, and I were in the same room, I was quiet.  I mentioned it to Sybil, but it was not a big deal because it happens all of the time.

The second night...well morning actually...was no different.  I was lying there trying to "will the pain away" because I just wanted to relax in bed.  Sybil, uncharacteristically of late, put her head on my shoulder while catching up on her Facebook feed.  Occasionally, she would whisper something that might be interesting (nothing on Facebook is interesting to me, but I digress).  After about 30 minutes, I could take no more, kind of shook Sybil off of me, and sat up.  She asked me what was wrong, and I told her my back was hurting.  I sat there doing stretches trying to get the muscles to relax and eventually they did.  Naturally, Sybil did not do anything to help, but I did not really expect her to.  The rest of the trip was uneventful and we came home.

On Monday morning I greet her with a smile and a kiss.  Sybil is giving off a vibe of irritation.  I figure whatever...it's Sybil.  I proceed to do my morning ritual, we get in the car, and drive to the office.  On the way, Sybil tells me that I "am doing it again".  I am not communicating.  When I sat up Sunday morning, I did not tell her why.  I was cold and distant.  She had to ask what was going on.  I did not tell her what was happening, and she had to pull it out of me.  This accusation hit me pretty hard.  I explained that I was in physical pain and all I could think of was to make it go away.  Naturally, she was not having it.  The only time she even acknowledged the possibility of my pain was her statement of "the beds were hard and everyone's back hurt".  I tried to maintain Medium Chill (MC) and Grey Rock (GR).  I tried not to JADE or engage in a circular argument, as we sat in the car.  Finally, I could not take anymore and went into the office leaving her in the car.  We worked that day.

When we came home, Sybil started in.  It seems she was just trying to point out my lack of communication and how I was "doing it again" by not immediately telling her.  She felt that we were snuggling and my sudden departure was mean.  Again, I stated my case once.  Tried to maintain MC and GR.  Again, my "cup was full" and I blurted out that for her my physical pain is less than her feelings.  She stated as my wife, I should care about her feelings.  I replied that as my wife she should care about my physical pain.  I stated that it was apparent that I am no better than some utilitarian tool to her.  A box cutter...a piece of paper.  I stated that I am a paycheck.  Feeling that I was about to lose control, I went inside the house.  The conversation was pointless anyway.

That night Sybil started it again.  By this time I had calmed myself down.  I was able to maintain MC and GR much better.  I stated that I feel badly that she feels bad, but I probably would do the same thing again in the same situation.  I stated that her lack of empathy is telling.  I then closed my eyes (these conversations are so draining) to go to sleep.  Now, we lying next to each other.  I hear my phone chime her tone.  I asked, "Did you send me a text?"  I am lying right next to her.  I asked her to just tell me what she wrote.  Naturally, she would not (the words petulant child came to mind).  I went to sleep.  Here's the text: 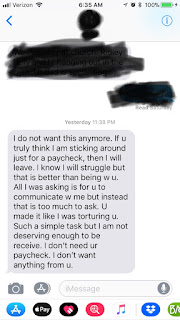 So Sybil is acting pouty.  She maintains a poor attitude.  Again, petulant.  I'm tired of having to raise her.  As if to add insult to injury, she has not even looked at the Apple Watch I gave her for Christmas.  That will be the last Christmas present from me.

Posted by aphron at 5:27 AM No comments: