Nice Little Graphic of Sybil's Pet Name for Me 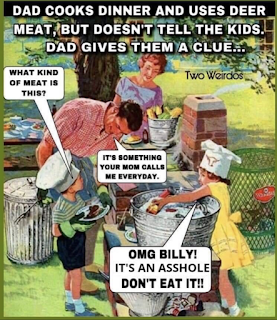 I'll just leave this right here.  As soon as last night, I was called "A$#hole".  In this case, I will own that I did do something wrong.  In a moment of weakness, I was not honest with Sybil.  In my weakness I did not confront her with a demeaning comment she said to me in front of others.  I'll take 50% of the blame.  In my mind there is no point in confronting her with stuff because even on the very, very rare occasion I get her to somehow apologize, the apology is hollow.

This is my conundrum: I do not feel that I can (safely?) confront Sybil with things that she does.  I have to wade through a river of crap with a rare reward.  This leaves me with the choice of having a closed relationship with my wife or constantly fighting battles.

There is a third option...Sybil keeps talking divorce.  Now, my mind is made up.  I will not be the one to divorce.  Maybe that is stubborn pride, but she will have to be the one to make that decision.
Posted by aphron at 6:14 AM 1 comment:

Any Response Will be Wrong

In this scene, Private Joker makes the statement that no matter what he says will be wrong and the Drill Instructor will abuse him more.

I have noticed this with Sybil.

First a quick update...not much to update.  After that tremendous blow up last week because I don't know her after over 26 years of marriage.  If I DID know her, I would know that she likes a slow wake up and not more sleep.  This just means I know NOTHING about her.

The thing about Sybil is she likes to keep the drama (hurt) going as long as possible.  She likes for us to work on our marriage (really that is a euphemism for "fixing" me).  What this means we have to communicate about everything.  It does not matter that when I do try to open dialogues of communication with her, she criticizes the techniques of opening the dialogue.  Naturally, this totally derails the conversation and makes me think, yet again, what a colossal waste of time this is.  No matter how I try, it will be wrong.  This will reinforce her resentment towards to me.  Then we are spiraling to nowhere.

I am the stupid one here.  I keep trying.  Sadly, Sybil has no desire for calmness and happiness.  She thrives on the conflict.  Watching her face light up and her gaze intensify is almost alarming.  What should only be greeted with sadness is really watching her get a charge off of the conflict.  I have seen this before: sports.  Watching someone get into the zone (psyched up) before a playing a sport is the closest thing I've seen.

Last thing as I document our situation.  Last night after trying to work on our marriage (by the way if one has to work on their marriage there is something terribly wrong) and failing to do it to Sybil's standards; she remarked that I do not "help her with her emotions".  She actually said that!  Then she added that she helps with my emotions and does not feel that I reciprocate.  Stupidly, I replied that I do not think I should manage someone's emotions; I do not think it is even possible to manage someone's emotions; and I asked for example of where she tried to manage my emotions.  Naturally, she was silent.  I can only assume she did not like me stating the obvious: one cannot manage someone else's emotions and she could not offer proof that she had tried to managed mine.  I could think of last week's blow up and how her seeing me visibly upset by her verbal abuse only led to her seeing an opening to "twist the knife" and become more abusive.

To work on our marriage is impossible.  Sybil demands that I change without any commiserate change from her.  How can I want to talk to someone that hurls insults and acts like a petulant child?  I cannot, but I still must.  The ol' obligation kicks in: my 5 year old son.  He is the only reason we are still together.  If not for him, I would have left years ago.
Posted by aphron at 6:30 AM No comments: 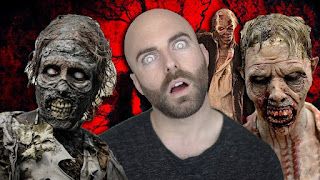 So Sybil and I have had a couple of dust-ups these past few weeks.  Sadly, I am so stupid that I do not recognize the pattern of slow, creeping escalation until it blows up in my face.  Last night, the bomb blew up...big time.  Like many other blow-ups, it was focused on how I marginalize how she feels.

Yesterday started like any other day.  In the morning I was in the midst of my ritual, when I heard Sybil's alarm on her phone in the living room.  Strange.  Apparently, the night before she had forgotten to take her phone to bed, plug it in to charge, so she would not be able to hear her alarm.  Now, I know that Sybil is not a morning person.  She likes her sleep.  I, also, know that she usually is not out of bed until around 6:50 am.  That is when I hear her get into the shower.  Her alarm went off at 6:30.  I found her phone, turned off the alarm, and plugged it in to charge.  I waited 20 minutes until 6:50 to wake her up.  She was surprised, thanked me and got up.  I went back to complete my morning routine.

Later, I came into the room and Sybil was looking at what clothes to wear for the day.  She stated, "I don't like to be wakened suddenly. I like a gradual wake up".  To which I stated, "When you make comments like that, it makes me feel like I am stupid for trying to be nice to you."  Wrong answer!  It was game on...big time.  In Sybil's mind I do not care about how she feels (I thought she likes to get her sleep in the morning), therefore I must be destroyed.

After dropping off our son at school, Sybil started yelling at me.  Cursing.  Called me an a#$hole.  Saying that I only care about how I feel and do not care about her feelings at all.  I turned the car around, went back home, as I did not want to be in the same car with her.  As I exited the car to get into my car, I was visibly upset (tears in my eyes).  What did this woman that I have pledged my life to do?  Turned the knife...of course.  She kept yelling at me, telling me how terrible I am, how I am not a nice person.  It is all about me; I never care about her or anyone else.  Yelling this the whole time.  Finally, she stated that she was done and was going to talk to a lawyer.  All because of my statement.  This lasted about an hour with Sybil becoming more and more enraged.

Last night, I broached the subject by saying, "Do we need to talk about this morning?"  Naturally, this was the wrong approach and shows I only care about how I feel; not how my actions affect others.  She had packed two bags, threw them into the car, started the car, then turned off the car, and stormed off walking into the night.  This was in the middle of the night.  She kept saying that she "just wanted to die".  She took off her coat and shoes to, I guess, expedite it?  I spent over an hour talking her back into the house.

A couple of thoughts...
It should be painfully clear by now that Sybil just does not care about how her comments affect me.  She cannot see beyond herself.  She does not care about intent but only were her feelings mollified. She will use bullying tactics (tantrums, threats, manipulation) to achieve her goals...at any cost.  We cannot have an intimate relationship.  How can I when making one comment opens a Pandora's Box of pain?  Our marriage is a zombie marriage.  It is not dead...it is not alive.  It needs a mercy killing.  A, metaphorical, bullet to the head.  Because of my convictions, I seem unable (unwilling?) to perform the coup de grace.  This will not end well.
Posted by aphron at 6:55 AM No comments: