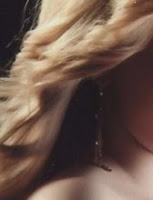 When I signed up for the Great Blogger Swap of 2008, I thought it would be easy enough to participate in. I write posts all the time, after all. But then I thought that maybe writing about potty training, sex at parties, and vomit wouldn't be quite seemly on someone else's blog, so figured I should probably shape up a bit. Not an easy thing to do since I'm currently pre-occupied by my dissertation on prairie dog mating rituals.

So as I sit here eating a bowl of oatmeal, trying to ignore my annoying pet marsupial, Maxine, what I keep thinking about is just how unbelievably difficult it is to be a good Christian. Scratch that. A good person. Now, I know that the definition of a good person is widely up for debate, however I can't help but wonder if anyone lives up to their own definition. Somebody wise and holy (I can't for the life of me remember who) said something along the lines of: the proof that we didn't just make God up is in the fact that we assign to Him attributes like "All-powerful," "Supreme Judge," and "Knower of all things deep and private in our hearts, including those embarrassing thoughts about Eva Mendez." Why would we make up a God like that? Why would we invent a "Father Figure" who gives out a seemingly endless supply of "tough love" when we could have a grand-father figure, who gives us ice cream for breakfast and lets us stay up late, just because we ask that it be so? No, the God of the Judeo-Christian world is too terribly awesome for our infantile imaginations to dream up. We happen to like our ice cream.

I think that the reason we have so many notions about how we should be, how others should treat us, how we should act, when we know very well that neither ourselves nor anyone else will actually end up behaving that way, is because someone else, far better than any of us, wrote it somewhere inside our hearts that there is something more. Something better. We have a noble purpose in someone else's plan. This intuitive sense gets quite inconvenient when we very badly want to do something very attractive and selfish (like sleep with the pool boy or, what the heck, Eva Mendez), but its still there. That's why a person who fudges on his time card still feels wronged when the plumber tries to squeeze out more money than agreed on for additional "parts" and "labor." We know justice even when we don't live it.

So what is a person to do when we all have these internal standards that no matter what, we (and no one else in history) just can't seem to live up to? I think the writers Zmirak and Matychowiak* summed it up best when they said, "Believe it all, do what you can, admit that you're basically a bastard, and turn to the font of infinite Mercy** as humbly and as often as you can. If there's one thing that's incompatible with Christianity, it's pride, or what today would call 'healthy self-esteem' and a 'clear conscience.'" And on that note, I shall close my post and prepare to ask God for forgiveness. I need it too. I am just a bastard, after all.

Oh, and thank you, Aphron, for your hospitality.

*No, I didn't make them up, but I bet you can't say their names quickly five times.

**For you Catholics, that's time in the box.

In my last post, which the issue was never resolved, Silent Male presented an interesting comment. He highlighted the ramifications, if I were outed. What if Sybil found the blog and read the posts and comments? What ramifications would that bring on?

Well, dear reader, I'm sure you already know what would happen. Given Sybil's temperament, I'm sure not good things would happen. She has already run divorce up the flag pole to see what would happen. The first couple of times, I was shocked into submission. Since I'm a slow learner, I finally figured out that was a form of emotional manipulation at best. Actually, one night she commented, "I guess we should call the lawyers." To which I replied, "Tomorrow would be fine." Naturally, she became upset and accused me of giving up on our marriage. The irony was totally lost on her. Anyway, I'm sure she would begin the procedures of divorce. For me divorce is, simply, not an option. I've listed the reasons somewhere on this blog, but the there are three basic reasons: my three children.

I am left with trying to conceal my blogging. I know that to be completely open and honest with Sybil would bring on Armageddon. I use Mozilla's Firefox because it automatically deletes my browsing history. No one that I know personally knows about my blog. I am as careful as I can be. I do not talk about my work or any other personal events to try to remain anonymous. It is sad in a way.

When I started this blog, it was a to vent the frustrations of my marriage without really causing any long term problems. I had hoped to receive some validation, and I have. Although this blog does not show the whole story of Sybil, I do try to remain objective about she how treats me at times. I am human, and I am sure some bias does creep in. There are some posts that written during a relatively emotional moment.

Although this blog was started as a way of finding vindication, I believe it may be documenting my life with Sybil. I pray it doesn't, but it may have to be used in the event of divorce. Denial is a powerful thing, but I am being to see that I am living with an emotionally abusive person.
Posted by aphron at 5:20 AM 6 comments:

Yesterday was quite eventful, especially the fireworks at the end.

Since I had the day off, Sybil, Son#1 (14), Son #2 (9), and I went to the office and did some work until Sybil and Son #1's orthodontist appointment. Lunch was put off until after 1:30 due to the appointment. We'd already had a full day of fun with Sybil.

We're sitting at lunch, when the topic of David Bowie comes up. Son #1 plays Guitar Hero (or was it Rock Band?), and a factoid came up saying that once David Bowie was hit in the eye with a lollipop at a concert. I said that must explain why one of his pupils being bigger than the other. Sybil begins questioning about it. Finally, I say that it was assumption and not a fact. To which she snaps, "I guess it wasn't the TRUTH!" Practically spitting out the last word. I ask her why she snapped at me. Naturally, she says she didn't. This time I had witnesses. Son #1 got my back and told her that she did. Immediately, Sybil became defensive and denied it. I explained that she had indeed snapped at me. After the third denial, I simply said, "Whatever," and stopped talking. I figure what's the point? She'll never admit to the possibility that she has a sharp tongue.

Flash forward to last night. Just about the time we're going to bed, Sybil starts in. Didn't I know she was mad? No. If one is mad, I shouldn't have to figure it out. She is mad because I stopped talking. I explained my reasoning. She starts yelling at me. By this time she is completely unhinged. She is yelling so much that she is actually spitting on me. The gist is my stopping the conversation during lunch. I try to explain that I didn't want to talk anymore, because she was in denial about the possibility about her demeanor. Sybil continues to deny ever snapping at me. Of course, this isn't a calm, adult conversation. She is continually yelling at me. Finally, she yells, "Why don't you sleep on the couch!?" I, of course, say no. Sybil continues her tirade. Finally, I decided that the couch is preferable to this abuse, so I go sleep on the couch. I cede the field to her.

I'm a little tired. The couch is just a little shorter than me. It was worth not listening to her.

More discussion with Sybil yields why she was upset. It would appear that she was giving all kinds of signals all day yesterday, and I was supposed to note the signals, go to her, and ascertain the problem. Since I did not approach her and ask what was the matter, she became angry and felt ignored. We had about 30 minutes of alone time, and that was right before going to bed. Also, we never completed our conversation about David Bowie. As to the issue of her demeanor towards me, Sybil is in complete denial that she did anything wrong.

Well, the big 15 came and went. I know everyone wants all of the play-by-play of the night's festivities. Let me tell you, it was a night I'll never forget. We were up until the wee hours of the morning. I'm totally exhausted as I write this post.

We got started a bit late. We dropped the kids off at home and set out for a local sushi restaurant. Just the two of us. That by itself is a real treat. We sat there just enjoying ourselves. Of course, a large part of the time Sybil was on her cell phone trying to coordinate Daughter and one of her friends trip to camp today. I knew this night would be something special. After the restaurant, we went back to my office and did paperwork until 12:30 am. That's it. That's the anniversary. Granted this was stuff that had to be done, but it could have been done yesterday. However, Sybil was out of the office pretty much the whole day running the kids to their over-scheduled activities. Anyway, by the time we got home I was so tired I went to bed.

On related note, I've discovered why my libido is low.
Posted by aphron at 4:04 AM 7 comments:

Fifteen years ago today, Sybil and I got married. It was a bit of a rushed ceremony at the justice o' the peace in the southern city we were living. Rushed because Sybil was about 3 months pregnant. What a shocker! We were in grad school, no income, dated hot and heavy (I do mean heavy) for about 6 months. It took me a long time to grow into fatherhood. Suddenly being thrust into that role was disconcerting.

I guess we are beating the odds. I don't think many would have lasted that long with the world arrayed against us. I guess that is something to celebrate. Being married has been very difficult for both of us. Looking back, I regret not putting off sex and concentrating more on building a foundation. However, I don't think that would have done any good. Sybil never acting the way she does now. She never seemed so controlling, so easily angered. During that time, we never really had an argument. That should have been a red flag.

Although there many things about my marriage that make me unhappy, I appreciate the miracle. We have to learn to accept those around us as they are and not how we want them to be. It is very difficult. We find ourselves saying, "If only she did this or didn't do that..." It is human nature to want more, but it is also dangerous.

At the end of the day, I love Sybil. I won't lie and say there weren't times I wish we weren't married, but I do not believe I could picture myself with another.