Thank Goodness That Weekend Is Over

The longest three days of my life, I think.

Started Friday morning with me trying to form some sort of connection with Sybil.  I was telling her that I loved her and tried to get physical.  Trying to get something going...not just sex.  Anything.  Was not what she wanted.  I did not do it in a timely enough fashion; I only wanted sex; and I did not make it special enough.  Great.  Good.  Let the healing begin!

Friday night ended with a bang.  I told Sybil that I loved her.  She pressed me on what did I mean.  Now, I did not handle my reply well at all.  I told her that I liked her better when she was less angry and resentful.  I should have formed my reply better.  I admit it.  I have to keep things as sunshine, rainbows, and unicorns.  I was in a negative place and it came through.

Saturday was no better.  I tried to stay more positive, but my replies made Sybil think that I only thought of her as a business partner.  Fireworks ensued.  Meanwhile, my toddler son keeps saying "Mommy crying."  Awesome.  Again, I have to keep my feelings out of things, because Sybil can only handle sunshine, rainbows, and unicorns.  My feelings do not matter.

For the grand finale, Sunday night was the Mother of All Arguments.  To set the stage, I had made a comment that we had a lot of shows cluttering up our DVR.  We missed an episode of a show we like to watch, and I thought that might be the reason.  Now, when I perused the DVR list, I saw a bunch of the Real Housewife shows.  Sybil records every episode of every show.  She loves to watch it.  The drama helps feed the beast.  I had (see...past tense...you see where this is going) three shows DVRed (one of which I was saving for Easter).  I like to watch movies, so I had saved these recordings.  Last night I noticed they were no longer there.  I asked Sybil what happened, she said she erased them, and I kind lost my cool.  I did not yell or scream or anything.  I was irritated that she would erase these stupid movies without consulting me first.  She kept saying we had discussed the DVR clutter so she decluttered it.  I said what about 25 hours of Sesame Street that Son#3 will never watch that is still on the DVR?  She'll get to those.  Finally, her last words before storming off was, "I guess you'd rather watch a movie than talk to me."  It didn't matter that there were a ton of shows that NO ONE WATCHES!  She deleted my movies.  It was the principle of the thing.

Anyway, the night went down hill from there.  Major fireworks.  Again, I did not keep things in a non-challenging way.  I made her feel bad and questioned her.  I struck at the heart of her deep insecurity.  This made me the bad guy, I mean they are just dumb movies and they will come on again.  This morning I realized that she was wondering why her Real Housewife shows were disappearing off of the DVR.  I don't delete those, but the way she has it programed, the DVR will delete to make room.  Sybil will never admit in a million years that she deleted my stupid movies to make room for her shows, but that is what I suspect.

What did I learn from this weekend?  I must maintain Medium Chill no matter what the situation is.  I cannot really share my thoughts and feelings lest I face the backlash.  I learned that I have to take it like a man to keep my family together.  So I will continue to work on not showing or telling what I really feel.  I will live a lie because I believe it is better for Son#3, who is less than 3, to have two parents living together.
Posted by aphron at 6:02 AM 17 comments: 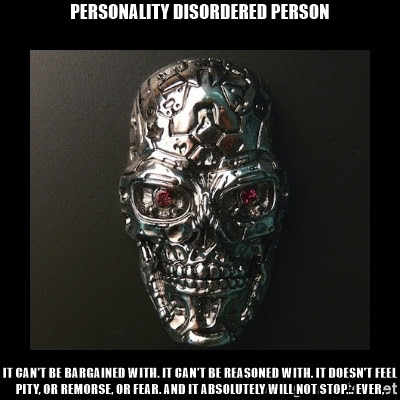 It has taken an inordinate amount of time for things to become clear.  We are all a product of our upbringing no matter how much we wish we could escape it.  Therefore, I did not really know what normal behavior was.  I mean, sure, I didn't like the way Sybil acts.  My mother acts kind of crazy giving into fits of anger even rage; I thought that was a normal reaction to negative stimuli.  My father, whom I have the highest respect for, did not really deal with my mother well.  Instead of setting boundaries of behavior and calling her out for bad behavior, he tended to pull back and distance himself from her.  Interestingly, after his retirement, he has kind "gone his own way".  He does whatever he wants: camping, motorcycle riding, visiting friends.  They don't even sleep together.  He invites Mom, but he does not expect her to go (and probably does not want her to).  Mom seems to not understand her part in their situation.  She may have moments of crystal clarity, but she does not really see herself as the catalyst.

Ironically, Sybil has many of the same traits as Mom.  That's why she does not really like my mother.  Sybil, subconsciously, sees herself in her.  The way Mom treats Dad is very similar to the way Sybil treats me: a lot snark.  Who would wants to put up with that?  So Dad disengaged.  He ignores.  Naturally, a PD person hates being ignored.  This only aggravates the situation.

In other news...Sybil decided to start something again last night.  I don't think I maintained my Medium Chill very well.  I still think that I am dealing with a normal person and can appeal to their intellect.  I always forget they are like the Terminator.  Sybil is a high functioning PD, in my opinion.  This makes it even worse because no one knows her like I do.  Anyway, she feels that I am too disengaged, too remote, she needs verbal stimulation.  That's code for she needs verbal drama.  I recognize the trap.  She wants me to unpack my heart, tell her my feelings, and then we can spend hours arguing why I am wrong to feel a certain way.  I've seen this movie before; I know how it ends.  Sybil doesn't really care how I feel; she only care that she is right.  If she is right, then I must be wrong.  Binary thinking. I can tell that I've got a lot of work ahead of me.
Posted by aphron at 7:02 AM 2 comments:

So now I'm coming to grips with my situation.  Thanks to Anon, I went to the sites he/she posted in the comments in my last entry.  I went to "Healing from Narcissistic Abuse".  Not very many posts. However, the one that really struck home was not the one linked in the comments, but the one about codependency.  Many of those traits I saw in myself.  That's where the despair comes into play.

There was a time where I was much more "Alpha".  I was very self-assured.  It's amazing what 23 years of gaslighting will do.  The Stockholm Syndrome thing, I guess.  Sybil had me questioning myself that maybe I was more than just a normal person that stumbled; maybe I am a selfish jerk.  I know she has used those exact words so many times over the years.  Gaslighting is an insidious  phenomenon.  Over time...like water on a rock...it breaks down the target's defenses until the target is left kind of a shell of his former self.  Then the narcissist complains that the target is a door mat.  The target can barely draw a breath.

At this point, my despair arises because my personality will not allow me to do the one thing that I probably should do: divorce Sybil.  I am "built" to try to be honorable and to some degree stoic.  For the first time I find myself at odds with myself.  As I explore the depths, I find that it has caused my libido to crater.  I have read articles and blog posts by women that complain their husbands are not interested in sex.  I believe the problem is not their husband but the women.  I wonder how many are like Sybil: never happy, always complaining, overly dramatic, lacking empathy?  Unless the husband has some physical ailment, I believe the husband just wants to get away from the harpy with whom they are cohabitating.

It will be interesting to see how the saga unfolds.
Posted by aphron at 11:32 AM 2 comments: