Had a good one this weekend with Sybil. For some reason it's always the weekends. Anyway, it all started with Son #2's friend sleeping over.

First, a little background: Son#2's friend is, shall we say, high strung. One time while sleeping over, he refused to eat pancakes because we had the wrong syrup. He doesn't play well with others. Once he gets focused on something, he will not change course without a major blow-up.

Saturday night we had some friends over to hang out, watch football, and eat dinner. We had checked with this friend to see what he wanted for dinner. The first thing he said was "mushroom pizza from _____." This is very telling because he names the pizzeria and will accept no pizza from anywhere else. Since no one else wanted pizza, we asked if spaghetti with marinara sauce would be ok. Yes, that was acceptable. We placed the order (no food in the house, of course), and Sybil went to get it. When Sybil returned and we called everyone to dinner, this friend was told that we had gotten spaghetti for him. He walked off saying he wasn't hungry. He was not impolite nor did he pitch a fit. I tried to talk to him and explained that he said spaghetti would be ok. He refused to join us for dinner and stayed in basement away from everyone.

When I rejoined the group, our other guests were surprised by the reaction and were making comments about eating what was served, strangeness of the boy, etc. I made two comments: "when I was growing up, I was given a two choices: eat what was prepared or fix it myself," and "he is a little high strung." Now, Son#1 (who is 12) was there. He was making comments before and after I made these two comments along with the other people. Sybil did not like my comments. She, nicely, asked me to stop making those type of statements. I did not feel that I had done anything wrong and became a little loud in my defense. This only exacerbated the situation further. Sybil called me aside to talk to me. Long story short (too late, right?): we did not agree.

Fast forward to last night. Sybil needs closure on this incident and brings it up again. I, again, say that what I said was not all that bad. She maintains that it was not a good influence on our son. She adds that I only reinforced his bad behavior. I still maintain that what I did was nothing more than vent some frustration. We did not reach an agreement. Sybil thinks I am insensitive and was not a good role model in this instance. I think I made two small, innocuous comments.

Oh, the child in question got to eat his pizza. However, I'm still in the doghouse.
Posted by aphron at 5:26 AM 11 comments:

What Can I Say?

I don't have much drama with Sybil, so I haven't been keeping ya'll entertained with our hi-jinks. We had a decent-sized argument this past weekend. It was mostly about me not listening to her or taking her seriously. I think...I can't remember.

This blog was started as a way for me to vent my frustrations of feeling victimized. This process has taught me that I have to own my part of the problem, too. We all have personality problems. Some more than others. My problem is focus. I tend to lose focus and let my mind wander. Sometimes I wonder, if I have ADD. This personality flaw causes great friction with Sybil. She believes that I, purposefully, ignore what she says and don't respect her. While I don't consciously ignore what she says nor do I not intentionally disrespect her, I do admit to finding myself somewhere else during conversations. It takes a great deal of effort to remain with her and engaged at times.

Two things have helped smooth things over between us. I make myself stop whatever I am doing or thinking so I just focus on her, and I have come to realize that Sybil is a passionate person. Unfortunately, I am not. This causes great consternation on my part, since she is very expressive during a conversation. She feels that she is not "getting onto me," but her way of speaking and body language seems to suggest otherwise. When we are having these types of "discussions," I must remain calm and listen to the words and not read the body language. I'm surprised at how much Sybil's body language causes my emotions to flair.

Denial is a powerful thing and breaking through it is difficult. No one likes to look at themselves in a negative light. My journey of self-improvement continues.
Posted by aphron at 5:50 AM 5 comments:

A Nation of Pansies

With more and more schools losing recess in favor of gym, this story is indicative of the future. Is it any wonder that Ridalin and other drugs for ADD and ADHD are fastest growing segment of the pharmaceutical industry? When can kids be kids?

Now we find that the game of tag is outlawed. We are afraid that a child might get hurt. Give me a break! What are kids supposed to do? Are they that delicate? How are we going to raise a nation of entrepreneurs and risk-takers without giving children the chance to fail? We can't expect them to able to handle adversity without strength of character.

Am I alone in the wilderness?
Posted by aphron at 2:28 PM 8 comments:

YES! We should pay teachers more! 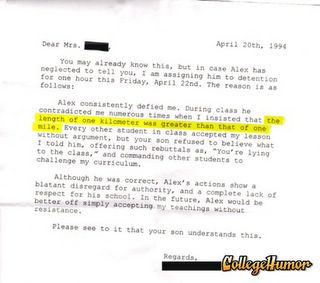 I hope my kids get this teacher. I may get flamed for it, but sending a kid to detention for being correct is too much. Although this happened awhile ago, I'm constantly amazed by the lack of learning my kids' teachers have. I can't tell you how many times we've gotten notes with typos and bad grammar. I can live with typos, but if a principal cannot make a coherent sentence, then she should be fired.

Jesus said to him, "I don't tell you until seven times, but, until seventy times seven. Matthew 18:22.

I have a confession to make: I have been resenting Sybil. I have not been a very forgiving person. I have not confronted her enough on she makes me feel. Resentment was allowed to take hold and harden my heart. Sadly, it affected me in a way that I had never expected. I found myself not wanting to be near her, talk with her, touch her. I just wanted to be somewhere else. I would not let myself forgive her for her faults.

The weight was lifted, when I forgave her. Sybil is human. She has many more admirable qualities than I write about. Unfortunately, I chose to focus only on the things that were negative. The power of forgiveness of which Jesus speaks isn't necessarily about helping the person doing wrong, but it is also about healing the person wronged. Forgiveness liberates one from the past. I was shackled to my past dealings with Sybil. I had allowed these events to shape me and affect my behavior.

Achieving a state of Grace allows one to start loving that person. Agape love is much more powerful than romantic love. How can a person love another, when he has resentment in his heart? He cannot. There is only room for one not both. I am ashamed to say that I was not Graceful towards Sybil. One may say that she does not deserve my forgiveness. Who, among us, really does? We are all fallen creatures. Achieving love and grace is the closest we can come to being Godly.

I hope those who are that point of pushing out love from their hearts will rethink their feelings. Forgiveness is truly Divine.
Posted by aphron at 5:35 AM 8 comments:

The Rise and Fall of America

In these last few posts I have sounded rather depressed. I always get this way, whenever an election is looming. Although I didn't start this blog to espouse my political point of view, I am depressed. It has nothing to do with Sybil. We are doing very well, thank you for caring. She has loosened up with regards to sex, and I learned to let her rantings not get me riled up.

First of all a disclaimer: I did not vote for a major party candidate during the last election. I have come to view the two parties as an amalgamation of one ruling party. Neither the Republicats nor the Democans are worth a plug nickel. I do not blame them. It is our fault for allowing them to seize power. How did this happen? Well, this might shed some light. We, as a whole, have managed to raise a society of people that have been coddled from birth until the grave. We are ENTITLED to a job, health care, retirement, etc. It is only getting worse. This 15 year old girl has been glorified for the excess laid upon her by her mother. Parents are no longer parenting. Heaven forbid we damage our child's self-esteem. We MUST pave the road ahead for little Johnny. Oh my gosh! What if he skins his knee?

Personally, I'm a little sick of it. I am saddened by what I am seeing. Our duty as parents is to prepare our children for the rough road of life. Life is hard. Unfortunately, The Cult of Low Expectations has taken over, and the barbarians are at the gate.

I'm bored with blogging right now. As if you haven't guessed! That's probably the main reason I haven't posted as much of late. Sybil is the same, but I'm learning how to handle her. After 13 years, it's about time. Basically, I just need to let her rant and vent, and then it's ok. When one is not a passionate person (outwardly), then one has a hard time understanding the passionate. Sybil is passionate. I realize her counting every little thing the same as big things makes it hard me, but it makes it harder on her. Alas, she won't change. Of course, neither will I.

Having been a little introspective over the last few days, has made me realize that a lot of my decreased libido was pent up resentment towards Sybil. Finding grace and letting it go is what I am striving towards. It isn't easy. I'm a "keep-things-bottled-up" kind of guy. Her libido is still higher than mine, but I am accommodating her desires.

I'm not shutting down the blog or anything. However, I reserve the right to change my focus. Since Sybil and I have really improved over the last six months, I find myself with less to post about. Also, I'm starting to feel that all I'm doing is whining about my situation. Therefore, I'll probably be posting on various relationship-type stuff.

I'm sure that I'll keep everyone entertained with a Sybil story now and then. She does like to create drama. I'll leave you with this example:
This morning she had to take the kids to school. I get out of the shower to see her using the bathroom. Instead of saying, "Would you mind leaving the shower on so I can use it?", she says. "You know, it'd be nice if you left the shower on for me. I did that for you yesterday." Nice.
Posted by aphron at 6:44 AM 1 comment: