A Sharp Turn to Ridiculousness 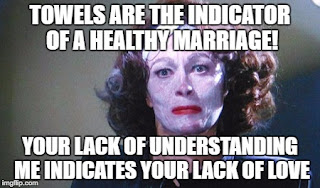 So we having nothing else to stress out about, apparently.  Last night we really took a turn into the ridiculousness.

Summary: we only had one towel in our bathroom yesterday morning.  Last night I noticed we two.  I remarked on this observation (big mistake).  Sybil stated yes, we have towels in the clean clothes bag that is located in our closet.  Then everything became circular.  Her statement only said we had towels in the clean clothes bag not the bathroom (begs the question of why didn't she just put all of the clothes up?).  Finally, she commented that she put a towel in the bathroom.  Kind of a stupid conversation.  Typical misunderstanding: one person thought their statement was clear, and the other person was not understanding how the statement was pertinent.

Sybil stated that I am becoming worse.  I do not listen to her.  Since I do not listen to her, that means I do not REALLY love her.  Naturally, her statement made me go into Silent Treatment mode.  How do I respond to the hyperbole?  All I feel is anger at the craziness of this conversation.  To keep me from JADEing and engaging her in a circular argument, I keep silent.  Sybil remarks on this.  Finally, I say this was a simple misunderstanding, I should keep my statements to myself, and I cannot believe she is engaging in this hyperbole (I did use this word; I'm not sure she knows what it means.).  I go to "sleep", which really I lay there stewing in frustration.

This morning I am about to leave.  We talk a bit about work.  As I am leaving, I ask her is there anything else we need to discuss.  Sybil makes the statement, "Nothing else about the office".  Naturally, this means we need to delve into why I don't love her because I did not understand her, which means I did not love her.  To which, I replied, "We can talk about towels this afternoon."

So, I've been really trying to buckle down and figure out how to handle myself with Sybil.  It's tough to unlearn bad habits.  It's tough to de-program oneself from all of the negative comments over such a long time.  I've endured so many times being called selfish.  I endured cognitive dissonance due to being called selfish, yet that not "jiving" with my reality.  Having my self-esteem systematically taken away, I started to really believe Sybil.  Fortunately, I never really truly believed her.  I knew there was no way I was that bad.  I earned 100% of the money, took an active role in rearing our children, did as much or more housework, I actively listened to her complaints, yet I was being called selfish.

Over time, I had comments on this blog from folks that were trying to point me in the right direction (God bless 'em!).  I was stuck because many would use Borderline Personality Disorder.  The thing that kept me from buying into BPD was the tendency for those with BPD to be impetuous.  Sybil is a lot of things, but she is not impetuous.  She has never thrown caution to the wind and done anything "spur of the moment".  Since I just could not square her as having BPD with my real life experiences, I plodded on.  All of the while knowing that something was not quite right.  The rages over perceived slights kept me knowing something was off.  Who cancels a Christmas visit with my family because I happened to look at a TV, instead of help her with Christmas cards (which I never asked her to do in the first place)?  No sane person would do that.  I could go on and on with more examples.  This blog has been a testimony to something not being quite right with Sybil.

Sadly, there is something not quite right with me, too.  Who would put up with this abuse?  Does a normal, well-adjusted person continue a relationship with the type of person I've documented?  Maybe some of the reasons I have been in denial for so long is the realization that maybe I am the one with the problem.  That's a big pill to swallow.  Selective amnesia helps, too.  During the love bombing phase, I always tell myself, "Now everything will be normal.  She will be loving, patient, and understanding."  Hope springs eternal.  Over time, I did become callous, scarred.  I loved a little less.  Sybil seemed to sense that I was pulling away, so she stepped up her antics.  I think a normal person would try to find a way to heal the person they loved.  Normal...what is normal?  Part of the problem is she will not accept responsibility for her actions.  The other side of the coin is that I keep trying to get her see my point of view...JADEing.

Now we are here.  Kind of coasting.  No longer willing to open up and express my thoughts and feelings.  It is pointless.  I have started to internalize the waste of time and energy that is.  Sybil will never see beyond her thoughts and feelings.  She is incapable of empathy at least in my case.  We're stuck.
Posted by aphron at 8:53 AM 2 comments:

So, as per usual, Sybil and I had a major discussion (fight) 2 nights ago.  As per usual, I tried to get her to see my side of things.  As per usual, she did not.  As per usual, I gave up.  The pitiful part is it took me 3 hours of non-stop JADEing to finally give up.  It's like I have a pathological need to never quit.  It isn't that I want to be right; I just want to be taken seriously.  As I am sure you realize by now, dear reader, that is never going to happen.  I read somewhere that a PD loves the image of you but never you.  I believe it. The discussion was a continuation of our last conversation. In reality, Sybil did not like me going Low Contact.  Anyway, I finally gave up and caved.  No concession from her.

The good news is that Sybil is happy.  Let the love bombing begin.  In the past I would think we had made some sort of break though.  Now I know better.  I know this nothing more than wishful thinking on my part.

If I can just plaster an idiotic grin on my face, we'll all be happy...until next week.
Posted by aphron at 8:58 AM 2 comments:

It was Friday, so it must be time to for the weekend.  To mark the occasion, we had a fight.  Naturally, Sybil did not see my side of things.  If I had only done X, Y, or Z, I would have, magically, gotten what I need.

On Wednesday night, we had kind of planned to be intimate.  I came into room; Sybil was looking at phone (Facebook) and watching her reality TV (Housewives of Something); she did not acknowledge my presence; finally, I asked her to turn off the lights; she did; and she stated, "I guess we're not going to have sex tonight."  Like a sad sack (codependent?) , I tried to make amends, but she was not having it.

Fast forward to Thursday morning, Sybil asks if there is anything I was thinking about.  I brought up last night.  I told her that I felt ignored and the coup de grace was her passive aggressive comment.  I tried to be low key, but Sybil felt threatened, naturally.  She started railing against me.  We drove to the office.  I have to leave for a meeting, and she asks me, "Do I remember what I said to her last night?"  I told her we would talk later (big mistake on my part).  I did not bring it up again.

Friday afternoon comes around.  Sybil is agitated because I did not bring up the conversation.  Round and round we go.  She never takes any responsibility (I know...I know).  I even get blamed for her having to be on her phone (monitoring a Facebook group for our work, and I've made comments about all of the red alert numbers on her phone so has to clear those out of respect for me).  I was supposed to make the moves on someone looking at a screen (phone and TV) and did not act like I existed.  I was supposed to climb over the pillow between us (yep, still there).  I was supposed to bring up my irritation with her comment and the situation that night (never mind that it was late and we were tired).  Sybil never, ever said, "You know, you're right.  I could have been a little more attentive."  Nope.  I just need two lousy sentences.  Not going to happen

I just don't seem to be getting anywhere.  I just can't seem to keep my thoughts and comments to myself.  Insanity is the belief in doing the same thing over and over again and expecting a different result.  I keep expecting Sybil to somehow give me a normal response.  I don't know why; I've never gotten it yet.  Nope, I have to keep JADEing.  I have some insane urge to actually try to open up to my wife.  I find myself becoming negative and bitter.  Normally, I am a pretty laid back, happy-go-lucky guy.  Now, everything seems to irritate me.  I seem to see the negatives in life.  I have to build those walls (boundaries?) or I'll be sucked down into the quagmire.

"I wish the sky wasn't blue.  I wish water wasn't wet.  I wish I didn't love my wife."
Joe Hallenbeck
The Last Boy Scout
Posted by aphron at 7:51 PM No comments: