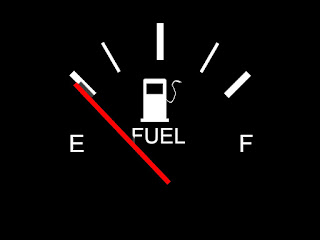 Gaslighting is a form of manipulation that seeks to sow seeds of doubt in a targeted individual or members of a group, hoping to make targets question their own memory, perception, and sanity. Using persistent denial, misdirection, contradiction, and lying, it attempts to destabilize the target and delegitimize the target's belief.[1][2]
Instances may range from the denial by an abuser that previous abusive incidents ever occurred up to the staging of bizarre events by the abuser with the intention of disorienting the victim. The term owes its origin to Gas Light, a 1938 play and 1944 film. It has been used in clinical and research literature.[3][4]

One of the things that have happened as I continue my journey out of the FOG is the realization of how I was manipulated and made to feel like a terrible person.  For years Sybil used a steady, relentless stream of manipulation to wear me down.  While I always knew that something didn't jive (hence the genesis of this blog), I could never put my finger on it.  Sybil was telling me how selfish I am; how inconsiderate I am; and how I didn't care about her.  In the beginning, I did not believe it.  How could that be true, I wondered.  I did everything I could: tried to be cognizant of her feelings, tried to take care of her needs, tried to help out at home, and did at least my fair share of raising the kids.  This was never enough.  I kept hearing, "More! More!"  A steady, constant stream of it made me question, "Am I doing enough?"

I was so deep into the FOG and so deeply gaslighted that I could not see what was before me.  I could not see the root problem.  What I have come to realize is that Sybil has worn be down and worn me out.  I have come to realize that I could never do enough.  Some people are inherently unhappy and will never be happy.  Instead of figuring out what needs to be done to be happy, these people would rather make everyone else unhappy.  Their currency is misery, since they are miserable.

It took me too long to see this.  I have heard it before and knew it.  Gaslighting made me unable to see that I was living it.  While I knew something was "off" with Sybil, I always thought I was root cause.  Over these last few months, now I know the problem is not her.  It is shameful how I let events determine me.  While I fought against it, I do not believe anyone can withstand it given enough time.  I do not know if it is a PD trait, but I know that it was unrelenting.

Now I feel very used and kind of discarded.  Sybil demands attention/affection, yet I get none; Sybil demands that I listen attentively and remember every detail, yet she does not pay attention to me; Sybil demands that I help out with kids, yet she is content to look at her phone while I do the work.  It was insidious.  I was totally unaware of the manipulation and using me for her own gains.  Now, I am constantly questioning any request.  Is it really something that is needed to do, or is it a way for Sybil to manipulate and control.  Sadly, many times it is the latter.

The constant jabs of criticism with no positive reinforcement has emptied my tank of caring.  As for love...I'm kind of running on empty.

Last night had a another session with Sybil.  I just can't seem to stop JADEing.  It seems that "I just know that THIS time I'll get through."  Anyway, he bone of contention is that I don't "woo" her anymore; I don't act like a love struck boy chasing the girl.  Her biggest is that I don't try to talk to her and be open with her.  I explained that I understand where she is coming from, I know the pain she is experiencing, but I explained that how can I climb the walls or cross the chasm she has put in place.  Literal walls.  She has a pillow placed between us.  When I point out these facts, I get either silence (actual silence), or I get an over-the-top emotional response about I am not listening, I only care about myself, etc.  I explain that I care about us, but how can I "woo" someone that is either cold (I said a block of ice) or raging at me.  She never gives a compliment or says something nice to me.  I point out recent times I have.  Not enough! I must "woo" her and ignore all of the abuse and manipulation.  Narcissism is ugly.
Posted by aphron at 5:38 AM No comments:

A Visit With Sybil's Family

I am finally writing my Field Report of our visit to Sybil's family.  It has taken me awhile as other things getting in the way.  I could document Sybil and my latest blow-up, but I need to get this out.

We survived the visit to my in-laws.  We spent a lot of money on the trip because airfare from our smallish city to their large city is expensive, and there are six of us going.  While other members of our family have visited, I had not visited in about ten years.  I have to say that it was the most stressful visit I have ever had.

The last night we were there Sybil and sister got into a major argument.  Sybil's parents are in a tough spot: they are basically shut-ins as they take care of their ailing, handicapped child (Sybil's oldest sibling).  Lately, there has been major tension between Sybil's parents, which necessitated Sybil's sister driving to them at 3:00 in the morning.  When Sybil learned the length and breadth of the issue, she offered her help.  The sister fired back at her not to get involved.  Apparently, there was simmering resentment from her sister because the sister looked at that as Sybil making the issue about herself rather than the family crisis.  The sister pointed out how can Sybil drop everything (caring for a four year old, helping me run our business) go 800 miles away; it was not realistic.  The sister was "spot on".  When this transpired, Sybil was more than a little put out that she was the last to know and that she felt dismissed (a major no-no). Sybil denied ever being, at least, mildly irritated about not being in the loop.  That left me reeling: had I made up the whole thing, or was Sybil that much in denial about how she acts?  I turned to Son#1 for confirmation.  I asked if he thought Sybil was upset, and he seemed to recall that she was.  Anyway, the sister was yelling at Sybil...kind of giving Sybil a taste of her own medicine.

Now I know where Sybil gets her anger.  The mother and the older sister are crazy.  They have major anger issues.  They will take a minor issue and make it into something that leaves wounds.  Sybil acts the same way.  Ironically, none of them see the damage that their behavior does.  The mother does not see that raging about a few baby food jars being thrown away does not build love but destroys it.  By the way, having visited their house several times, I can tell you it is a wonder that she missed it.  They have clutter everywhere.  I'm sure the father was trying to clear just a small area of clutter.  Throwing away used, old baby jars is not some overt act that necessitates rage.  When I say rage, I mean throwing water onto the father, leaving the house with no word as to where she is going, lashing out enough that the father has to call his kids for help.  These people are elderly.  Yet, the mother feels totally justified in raging at the father because he did not communicate about baby food jars!  Naturally, they put on their best face for us.  That was nice, but knowing the back story made me feel a little uncomfortable.

The sister's rant the last night she was there was over the top.  While I admit to a little schadenfreude, waiting until the last night was an ambush and unfair to Sybil.  The sister, literally, waited until she about to leave, thus leaving no time for reconciliation.  Sadly, there will be an undercurrent of anger and resentment.  Per Son#2 who was in another room with the sister's teenage son, the sister acts this way often.

To sum up, all of the women in this family are crazy.  Literally.  What does this portend for me?  More of the same.  Sadly, Sybil admits that she is like her mother and expects for things to worsen, yet REFUSES TO DO ANYTHING ABOUT IT!  That is what is galling.  To be self-aware enough to see what lies in the future, but not caring enough for those you, supposedly, love to at least try to change.  I do not want to be like Sybil's father: an elderly man trying to live through the crazy.  However, that is corner in which I have painted myself.  I took divorce off of the table.  I make myself live through this because of some crazy sense of obligation.  If I end up like my elderly father-in-law, I will have no one to blame but myself.  Maybe I am the crazy one?
Posted by aphron at 5:06 AM 2 comments: