One More Thing Placed on My Shoulders 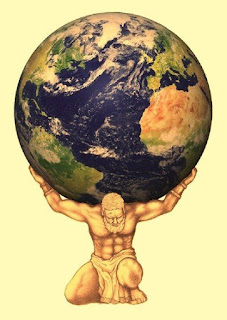 Maybe someday I'll stop getting sucked into Sybil's drama.  Yesterday was not that day.

Sybil mentioned that she needed to talk to me about something.  I waited until we had a quiet moment and reminded her.  I know...I know...big mistake.  The thing is...I knew better.  I knew that we cannot have a civil discussion on things that are kind of personal.  This was no exception.

Here are the details of the latest episode:

We were supposed to go to a friend's house to pick grapes as he is an amateur wine maker.  We were anticipating a day of fun and frivolity.  The weather was going to be perfect.  The day before he text to cancel, since the weather was so good they decided to go camping, instead.

We called the kids that may be going to let them know.  Not a big deal.  I'm not surprised he flaked.  Generally, he does whatever he wants, but one is welcome to come along.  Sybil announced that she would like to talk to me later about something.  Naturally, I knew this was not going to be to tell how much she loved me and appreciated being married to me.

So...last night I reminded her about her request to talk later.  Turns out that Sybil was letting me know that if I wanted to these fun things (camping, hiking, canoeing, etc) then I needed to work to make her "feel safe".   This left me quite confused.  We have had this discussion before.  I questioned Sybil to ascertain why she was bringing this up, as I had not even mentioned anything about camping or doing anything "risky" (I'm not sure how risky canoeing in calm water is but that's another thing).  She kind of dodged the question and, basically, repeated herself to let me know that I have to work to assuage her fears about doing anything "adventurous".  I expressed confusion, because we have had this discussion before and I thought it was resolved.  Sybil just kept repeating herself that I must make her feel safe.  Finally and this is what touched my last nerve she said that when I received word of our friend flaking and the reason (camping); I seemed happy. I was smiling or whatever.  I explained, that I may have been but not because I wanted to go camping (generally speaking I do but that never crossed my mind) but because he flaked...as expected.  I thought it was funny that he invited us over and then canceled because something better came along.  I was irritated at Sybil because without confirming (something she HATES) she assumed (something she HATES) and prejudged me.  I hate hypocrisy with a passion.

Basically, this is a form of control.  Sybil exerts her neurosis and uses that as a cudgel to control my actions.  I will never be able to allay her fears enough to do anything.  So like the mighty Atlas, I have more and more placed on my shoulders.  If I want to involve the family in these outings, I must take on her fears and somehow slay them.  Anything outside of her comfort zone causes a lot stress and anxiety for her.  Sybil has to have things planned not only to a "T" but also to her liking.  The concept that someone can plan something differently than others is an anathema to her.  I think that is an impossible task. What if I, simply, shrug?