I don't have much to update.  Still simmering resentment from Sybil to me.  Sadly, this creates simmering resentment from me to Sybil.  Sybil feels strongly the incident with the truck shows a pattern of loving her enough.  No matter that it may have caused me to go from a chest cold to bronchitis with the me having to take the meds to treat it.  No resolution.  Just a long running argument.  We are terrible in conflict resolution.

When do the "shit tests" end?  Never.  A good running example is Sybil saying I need to "woo" her.  Ok...never mind that we've been married 23 years, so why do I have to treat her like we are still dating.  People get married so they don't have to date.  Anyway, the shit test goes like this:

Step 1 - Sybil says I don't ask her out and plan an outing.  I don't make a fun date.
Step 2 - Ask Sybil out.  Sybil complains about the why I am asking her for a Friday night date, instead of a night that is closer (it's Tuesday).
Step 3 - Change it from Friday to Thursday after we do a few things at the business for the end of the year.  Sybil complains that I ask her to go out after I made her work (we came to an agreement about the day).
Step 4 - Complain about the way I ask her out.
Step 5 - I am angry and don't really want to take her out.
Step 6 - Repeat until one of us dies.

It never ends.  Ask me to do something nice and then complain.  Did that with Valentine's (I bought her a small box of candy; she did not like how it tasted; and she bought me nothing...not even physical affection).  I don't expect her to do anything nice for me.  On the rare occasions she does something for me, I appreciate it.  Sybil expects me to show her love by perfectly "wooing" her and holds it against me when her expectations are not met.  Since Sybil has such high expectations, she is always disappointed.  Never satisfied.  That's the fundamental difference: I do not expect anything from anyone; Sybil expects perfection from everyone.  She is disappointed which adds to her negativity.

Not too hopeful about the New Year.
Posted by aphron at 1:43 PM 2 comments:

No Good Deed Ever Goes Unpunished

So it's winter time, almost.  The temperatures are pretty chilly even for our area.

This morning Sybil and I are trying to leave to go to the office.  Son #3 wakes up right before we need to leave.  Since he's two, that is a problem.  Daughter is there to help, but the boy loves his mother.  I tell Sybil that'll go start my vehicle to get it warm for her and she can sneak out when able.

I go to the vehicle and get it started.  The temp is 33 degrees.  I cannot go back inside because we are trying to sneak away from Son #3.  I decide to sit in the vehicle while it warms up.  I figure the odds that Sybil can get away are about 65 to 35 against.  After waiting about 10 minutes, Sybil manages to come out the front door.  I move the vehicle closer so she can get in without having to manage with the edge of drive way.  Her first comment is my not have the seat warmer on for her. The second time she made that comment, I told her I made the whole vehicle warm.

Apparently, Sybil had time to think on the way to the office. As soon as we were in the warmth of the building, she let me know how I failed. I didn't have the vehicle positioned correctly (so Son #3 could not hear), I did not have seat warmer on, and I did not get her bag. I explained that those issues seem to totally negate the fact that I sat in a cold vehicle for 15 minutes. 1 told her that there is no point in trying to do something nice for her because she will find a way to turn it into a negative.
Posted by aphron at 10:34 AM 3 comments:

Which definition is apropos?  Is Sybil "full of hate", or am I "of or deserving hate"?

The simplest conversation seems to take the turn for the surreal as Sybil expresses her "disappointment" by projecting herself to be hateful.  Today's episode is my trying to engage her in a conversation about what to do for the office Christmas.  Do we need to go to a certain store after work today and purchase items?  The conversation went sideways as I did not readily remember the other parts of what her plan was: gift cards in addition to purchased items.  Sybil could barely keep her contempt in.  The way she expressed herself to me made her feelings very palpable.  Since I only got half of the plan correct by not remembering the gift cards, is Sybil "full of hate" or am I "of or deserving hate"?  That is the question: where is someone no longer allowed to be patient and understanding?  I'd like a ruling.

By the way, we did not decide on going to the store today.  At the end, Sybil acted hateful; and I disengaged.  Like so many of our conversations, nothing got accomplished.  Well...that's not true.  We're pissed at each other.

Many times those that have been in a car wreck know that everything seems to slow down and no matter what the wreck still happened.  It's like the event was pre-ordained and no matter what there was going to be a wreck.  That's how it's going with us.  Here is a nice pic of what Sybil presented to me last night: 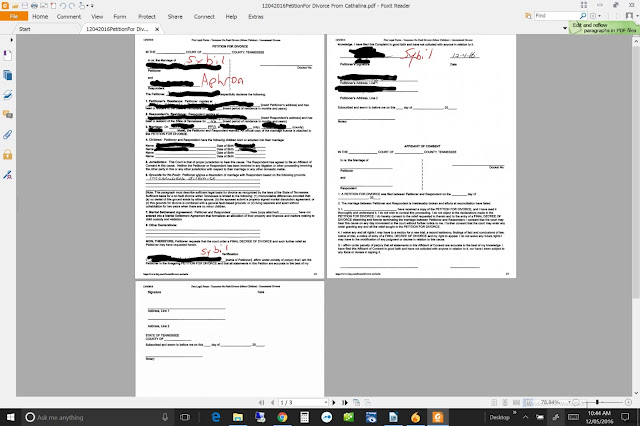 Sybil in her altruistic way spent valuable time Googling, downloading, printing, and completing a divorce petition for me, or that was the reason she gave me.  I just do not know how to respond.  If I REALLY wanted a divorce, I would taken care of this myself.  I'm not the one that during every spat that isn't going my way starting saying I want a divorce. We seem to have one about every Sunday.  Makes for an interesting Monday.

Quick details for documentation's sake: Saturday morning I did not pickup the rent check because Son#2 had a parade (we didn't know).  I had something to do at the office and did not feel that I would have time to pick up the rent check and be back in time for the us to go to the parade.  I thought I communicated with Sybil, but I guess I did not.  Anyway, major blow up.  When I get home from office to go to the parade, she calls me and starts yelling.  It's stereo due to yelling from upstairs and into my phone.  Calls me a liar because I thought I had talked with her.  We got off of the phone.  I took Son#3 outside to play.  Thought about it.  Came back in, apologized, gave her affection, asked forgiveness, did not receive.  After the parade, we eventually get the rent check.  On the way, we go through the conversation again.  Sybil lets me know how hurtful it was that I did not follow through with the plan and communicate with her.  I was contrite and accepted responsibility.  Later that night, she got a text from Son#2 that Son #3 like Reese's candy.  I try to let her know that I have a weakness for these kinds of foods (she had just bought 2 packages of Chocolate Chunk cookies) and to not buy them.  I let her know that I struggle with sugar and may be a sugar addict.  Instead of trying show empathy or concern, she spends most of the conversation poking holes in my theory.  I get angry because, again, she does not seem to take my concerns seriously.  Sybil knew I was angry, and I know this because she told Son#2 that I was angry.  If the roles were reversed, she would expect me to confront and comfort her to assuage her angry towards me.  She did not do this with me.  I do not expect her to, because I will confront you if I have a problem with you.  Anyway, the next day during conversation I said made comments in a way she disapproved.  I don't think I was angry still (I never expected her to talk with me, and I knew that talking with her would go nowhere).  Later she asked, if she had done anything wrong and I told her no.  I told her I had apologized for the way my words came out.  Since she started the conversation, I took the opportunity to express my irritation (by now) with how she talked to me last evening.  Eventually, she gave a verbal apology.  Normally, I would accept it, but Sunday I could not.  Too many times I've apologized for the slightest infraction, and my apology not being good enough.  The reason Sybil would not accept my apology was the way it was delivered: no showing of true remorse and emotion in my delivery.  I did not hug and comfort her.  On Sunday I pointed out that Sybil did the same thing that I do to her.  I pointed out that her apology was no different than the way I deliver one and she was not following her dictum.  Her reply?  Full on snark.  She replied, "Since when did you become an expert on apologies?"  I gave her a chance to walk it back; she doubled down.  Things went downhill from there.  So she performed a web search, downloaded, printed, and completed a Petition for Divorce.  Her rationale is that she did it because that is what I wanted.

At this point, I do not know who is the crazy one.  I'm sure her point of view is different.  I'm sure she feels justified in doing and saying everything she did.  However, at no point during the 23 years of marriage did I present her with said Petition.  On about 3 occasions I have used the "Divorce" word in a heated moment.  Sybil has come to use during nearly every spat.  One thing I have come to realize is that we do not have the ability to resolve conflict.  I have to realize (because she has told me so) that I will never receive forgiveness for past transgressions.  I have come to realize that I must take steps for my protection.

Today I opened an account with an online bank.  I am resolving to set up some savings.  If she nukes our marriage, I have to be prepared.  My goal is to put enough money in the account to pay a lawyer to be on retainer and get a place to live.  I have to expect to be ejected from our house.  The Sword of Damocles hangs over me.  I hope to have several thousand dollars set aside within a year.  That may not be realistic, but that is my goal.  Sybil just does not understand the toll a divorce will take on her, the kids, and me.  It would devastate the kids; she would actually have to get a real job (she worked in her family's restaurant and has been working in my business after that); and we would be thrust into poverty.  Sybil has no concept of setting up and sticking to a budget.  In fairness, I struggle in that regard, too.