Women are Good for Only Two Things and Most Can't Cook 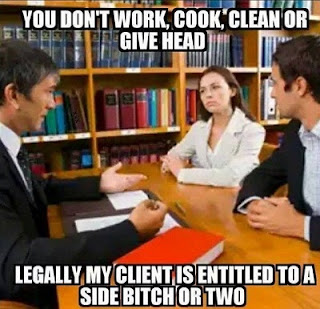 Stefan Gives Up
I reference the above meme and video from Stefan Molyneux in today's post.  They both encapsulate modern marriage.  Basically, women really believe what they've been shoveling.  They refuse to take responsibility for anything big or small.  Single mother? The man's fault (in reality she didn't choose well).  Husband has emotionally checked out?  He's an a#$hole (in reality she's such a pain in the a#$ to live with that he can't wait to die).  Kids are messed up?  They just won't listen (in reality she spends more time looking at her phone than interacting with kids).
The modern woman is narcissistic.  She does not care about anyone else's feelings on any matter.  The fact that someone may have a different point of view is an anathema to her.  The modern woman just really does not care much beyond herself.  Most of the time, they choose the easy path of just blaming others for their own problems and mistakes.  It is much easier to do this than be held accountable and be expected to learn and grow as a human being.  Instead, they stay as an adolescent, emotionally.
To hold a woman accountable is an exercise in futility.  They will lash out with the intent of destroying the person that actually is holding responsible for their actions.  It is far easier to destroy than create.  In destroying the person that makes even the slightest comment that seems even remotely critical, the onus is taken off of the woman to become introspective and work towards improvement.
I give you today's blow-up: I received an email regarding something vitaly important for our business.  I addressed it with Sybil.  In the course of the conversation, while I am still talking with her, she picks up her phone and starts looking at it.  Not a word as to why.  I let her know that I feel disrespected.  Her response?  "I thought you were just rambling".  Oh, really?....Rambling?  Silly me....I thought I was talking to my wife and business partner.
Now, if I were dealing with a fully formed human, Sybil would recognize that what she did could be construed as disrespectful and apologize.  Well, she just wears that skin suit.  Underneath, I am not sure what she is but it ain't human.  Instead, she goes into a vocal dissertation of how I deserve it because of our conversation the night before in which I was vague about how much money our business can provide personally.  I never said I wasn't vague.  Our business does well but the monies coming in can fluctuate.  This is something that she knows.  Somehow this allows her to be rude.
I give up.  I cannot be the only adult in this "marriage".  As I have written before, I am not going to be the one to ask for a divorce (call it stubbornness, pride, whatever), but I will not beg her to stay.  If being married to me is that horrible that she has to make both of us miserable, then she should just do us all a favor and leave.
Posted by aphron at 11:29 AM No comments:

: a feeling of indignant displeasure or persistent ill will at something regarded as a wrong, insult, or injury
Well...haven't posted in awhile.  Nothing has really changed.  I am still working on myself and how I interact with Sybil.  Old habits die hard.I could document another blow-up with Sybil.  Short version: she likes to work; undertakes a project and focuses on it exclusively; supposedly wanted to be near me whilst working; kept bedroom light on thereby making it impossible for me to sleep.  When confronted she went into full defensive mode up to and including making herself the victim.  She even threw our 6 yo under the bus.  Did not really take responsibility for her uncaring attitude.  Continued indignation at being called out.Per WebMD:Resentment describes a negative emotional reaction to being mistreated. There is no one cause of resentment, but most cases involve an underlying sense of being mistreated or wronged by another person. The right solution for resentment depends mainly on its cause and the individual. The path to healing involves forgiveness and finding a way to make peace with what happened so you can move on with life. I am the poster child of someone with resentment.  I try to let it go.  I really, really do.  I do not think resentment can be let go, since I am living with the person causing it.  The wounds are never allowed to heal, as new ones are created.Resentment manifests itself in many ways, but for me there are mainly two:I was much more quick to anger.  I say "was" because I have worked mightily at "Grey Rock".  It helps me maintain my center and deal with Sybil.The biggest manifestation is a kind of malaise/depression.  It has totally killed my libido.  I crave to be left alone.  I do not want to be near her negativity.  I have no desire for sex...at all.  This is not normal.  Bringing this up to her (no...I never divulge the cause. I just say it from the amorphous "stress"), does no good.  She acts as if it is solely my problem, and I should just deal with it.  I am treated as a hypochondriac. Basically, same ol' same ol'.  People do not change unless they choose to make an honest go of it.  Sybil seems disinclined to do so.  For my part, I am working on it.  I can only maintain my side of the road.  I pray everyday that I will, somehow, have this feeling lifted from my shoulders.
Posted by aphron at 6:32 AM No comments:

I Wish I Had a Nickel for Every Time I Heard These Words: "I Cannot do This Anymore"

This article got me really "noodling" about one of Sybil's manipulation tactics.  She love to try to stay one step ahead of people and get them to do her bidding.

"I cannot do this anymore," sobbed Sybil.

I hear this about every 6 weeks to two months, generally.  Sybil is going to quit, move out, anything to get away from me.  I am a terrible person.  I do not engage with her at level she demands.  We never just sit around and talk.  She refuses to have a marriage just like my parents: just co-habitating.  No real connection.  So Sybil is at the end of her rope, again, and she can no longer live like this.

Sybil has not left, yet.  She threatens...often.  I have lost count on how many times she has threatened.  It is always the same thing: she will threaten, I will think of our son, and I will cave in by saying the magic words.  While I realize I am dealing with an emotionally immature person that, while intelligent, seems to be able to delude herself with ease.

My parents marriage was a success.  They had their ups and downs, and I remember some terrible arguments.  However, they stayed married for 54 years.  They would still be married if my father had not passed away.  I would say that is pretty successful.  They produced two children that are contributing members of society.  They were in love.  I do not mean the Disney perversion of love.  I mean the deep connection love.  If my marriage is as successful as my parents, then I will be blessed.

Her parents marriage is a success, I guess.  They have been married longer than my parents were.  However, Sybil's mother is controlling and abusive in a similar manner as Sybil.  Maybe more so.  There is one instance where the FIL threw some baby bottles away without the MIL's permission.  The MIL, literally, physically assaulted the FIL.  Phone calls were made, and the children had to drive in to help quell the situation.  While Sybil likes to focus on my parents' marriage; her parents' marriage may be far more dysfunctional than my parents'.  They cannot stand each other but are locked into a death struggle because they are responsible for a disabled child.

I have few hobbies; I spend all of my time either working or being with Sybil.  That is still not enough.  Narcissists will, over time, isolate their victims to the point that they no longer have any friends or anything outside of the marriage.  I have two hobbies: working out and DnD.  Working out means having to get up very early to do it, so she does not feel neglected.  With DnD I spend less than ten hours a month playing at someone's house.  There is no drinking, profanity, any other nonsense and is played on a Saturday night, but I am not where Sybil can see me.  Therefore, it is bad.  When I get home, Sybil starts making comments about how long I'm gone.  She knows better than to come out and say it, but she wants to manipulate me into not going anymore.

Sadly, I have come to realize this all a means towards manipulation.  Sybil wants to be in control.  She hates surprises.  She wants to be in control of those closest to her because she is so insecure.  Her main tactic is manipulation either with words or deeds.  She knows I have strong obligation and duty traits and uses these traits against me.  While I can complain about it all day long, ultimately I am the one feeding the beast.  Every time I allow her to manipulate me into doing her bidding, I reinforce her bad behavior.  The only way to stand firm and just say "no."

Posted by aphron at 3:58 AM No comments: